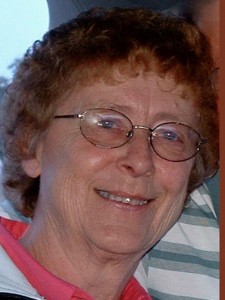 Services were held at 10:30 a.m. on Monday, October 3 at Moville United Methodist Church, with the Rev. Janet Rieckhoff-Faris officiating. Burial was in Arlington Township Cemetery.  Arrangements are under the direction of Waterbury Funeral Service of Sergeant Bluff.

Jean was born in Cherokee County, Iowa, on June 28, 1937, to Charles Cornelius and Lillian (Wunschel) Galvin. She was the 11th of 15 children.  Jean was raised on the family farm, and she always had fond memories of that time and playing with her siblings.

She attended a country school before attending Highview High School, where she excelled at basketball. During her senior year while playing basketball under Coach Garlock, she averaged 33.5 points per game.

After her high school graduation in 1956, she attended National Business Training in Sioux City and studied business, accounting, and played basketball.  She married Loren Clare Neville on March 19, 1960, in Sioux City. She helped manage the family farm and kept the books.

She enjoyed playing golf and traveling with Loren for two-ball golf tournaments throughout northwest Iowa, as well as the annual Galvin family reunions.   Along with their friends, the couple took many enjoyable trips to Las Vegas and East Okoboji.  Jean loved spending time with her grandchildren.

Preceding Jean in death were her parents, Charles and Lillian; her sisters, Alice, Betty and Deloris; and brothers Don, Paul and Larry.