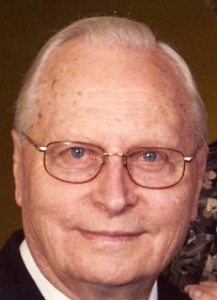 A celebration of Bill’s Life will be held at Trinity Lutheran Church in Gresham, Oregon on January 7, 2017, at 11:00 a.m. with Pastors Curt Zieske and Jerry Furgurson officiating. Bateman Carroll Funeral Home is in charge of arrangements.

A memorial service will be held in Iowa at a later date.  The Nicklas D. Jensen Funeral Home of Correctionville will be in charge of those arrangements.  Online condolences can be made at nicklasdjensenfh.com

Bill was born on July 27, 1922 in Battle Creek, Iowa to William K. Volkert, Sr. and Grace (Denker) Volkert. He was baptized and confirmed at St. John Lutheran Church.

He graduated from Cushing Consolidated School. He entered into a farming partnership with his father in 1942.

Bill was passionate about conserving the soil. He was an early advocate of contouring, terracing, and tiling. In 1982, Bill was awarded the district’s Marc Cox Award for conservation.

Lois taught school in Cushing until her retirement. Bill and Lois were foster parents for many years. Lois passed away on June 10, 2002.

Bill married Dana (Severson) Chidester on May 17, 2003. After their marriage in Sioux City, Iowa, Bill moved to Gresham, Oregon.

From this union, Bill became a father to Steve (Deborah) Chidester of Pleasanton, California and Susan (Matt) Danielski of Gresham, Oregon. Bill joined Trinity Lutheran Church, and he and Dana volunteered at Zarephath Pantry for over ten years.

He was preceded in death by his parents; his first wife, Lois; and many cousins and friends.