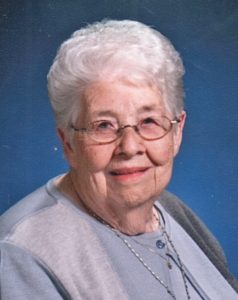 Rosina F. “Rosie” Needs-Walker, 93, from Kingsley, Iowa, went to meet her Lord and Savior on Wednesday, February 15, 2017 at  the Kingsley Nursing Home.

A funeral service was held on Monday, February 20 at 11:00 a.m. at Moville United Methodist Church.   Burial will be at Arlington Township Cemetery.  Arrangements are under the direction of McCulloch Chapel, Christy-Smith Funeral Home.

Rosie (as she was known by those who knew her best) was born on July 24, 1923 in Washta, Iowa to George and Emily (Baker) Needs.

She grew up in Washta, Iowa. She attended Washta Consolidated School where she graduated in 1941.  After graduation, she worked at Mental Health in Cherokee as a Domestic, guiding the residents as they worked.

She was united in marriage to Vern E. Walker on March 10, 1944 in Sioux City.  They made their home on a farm near Moville, Iowa until they moved into town.  One son, Bruce Vern, was born to this union on February 17, 1958.

Vern passed away on January 10, 1976 in Sioux City.  After his passing Rosie worked at several jobs: she was a Tour Guide for Allied Tours and a hostess at McCulloch Funeral Home in Moville.

She enjoyed being a member of the Elder Berry Dancers.  They once shared their talent at the Iowa State Fair, winning first place.
Her son, Bruce, passed away at Minocua, Wisconsin on November 22, 1995.

Rosie was a very busy lady, owning and running a mobile home park for 47 years.  She worked in the church where she raised thousands of dollars for the Heifer Project and counted and banked the Sunday’s offering every Monday.

Those left to honor her memory include her daughter-in-law, Sara (Dan) Scholter; her grandson, Beau Walker; special family members Sarah (Eldon) Meissner of Pierson; Marbeth (Chuck) Nyquist of Yankton, SD; Linda Robeson, Sioux City; Dave (Deb) Molstad of Moville, Dan Molstad of Sioux City; and their families.  Rosie will also be missed by her many nephews, nieces, and friends.

She is preceded in death by her parents; her husband, Vern; her son, Bruce; a sister, Frances Needs-Eubank; a brother, Frank Needs; and special friend Wayne Molstad.

Memorials may be made to Care Initiatives Hospice.