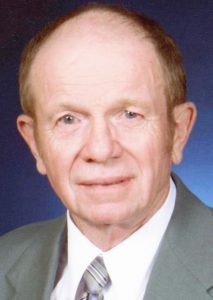 Memorial services were held at 11 a.m. on Monday, March 6 at Presbyterian Church of the Cross, 1517 S. 114th St., in Omaha. Private graveside services will be held. Arrangements are under the direction of Heafey-Hoffmann-Dworak-Cutler, Bel Air Chapel in Omaha.

Ronald was born on Oct. 23, 1937, in Sioux City. He graduated from Iowa State University with a degree in agricultural engineering and received a Master’s degree from the University of Nebraska-Omaha in civil engineering.

Ron was a longtime tenor and soloist at Presbyterian Church of the Cross in Omaha, with the Alleluia Choir, Chamber Singers and the Crosschords Quartet.

He is survived by his wife, Mary (Silzer) Haddock; his daughters, Jennifer Haddock (Victor Icenogle) and Rebecca Haddock Finn (Timothy); his grandchildren: Julieanna, Jessica, Everett, and Aidan; a brother, Jon Haddock; and his nieces and nephew.

He was preceded in death by his parents, Bruce and Georgette Haddock; and his sister, Marilee Evans.

Memorials are suggested to Presbyterian Church of the Cross for the music program or Vespers Concert series.