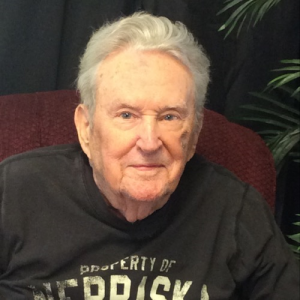 Visitation with the family present will be from 6-8 p.m. on Thursday, March 30, with a prayer service at 7 p.m. at the First Lutheran Church (3501 Dakota Avenue, South Sioux City, NE).

A celebration of life service will be held at 10:30 a.m. on Friday, March 31 at Grace United Methodist Church in Correctionville, Iowa. Burial will be in the Correctionville City Cemetery.  Arrangements are under the direction of Meyer Brothers Colonial Chapel. Online condolences may be sent to www.meyerbroschapels.com.

Rodney Eugene Hunter was born August 19, 1928 in Washta, Iowa. He was the son of Mearl and Margaret (Wathen) Hunter. Rodney’s family moved to Correctionville when he was a boy. He went on to graduate from Correctionville High School, joining the U.S. Navy in 1946.

He became a submariner serving on the USS Halfbeak SS-352 and the USS Greenfish SS-351. Upon completing his service in the Navy, Rodney used the G.I. Bill to attend and graduate from Buena Vista College.

In 1955, they moved to South Sioux City, where they lived for 15 years. Rodney started with Standard Ready Mix in the office. Then he went to Bekins Furniture Store, moving up to office and credit manager. In 1970, they bought a business, moved to Correctionville and built a new home.

Rodney and Martha were self-employed operating Woodbury Benefit and Benevolent Association, a burial fund agency. They retired in 1992. Martha passed away January 28, 2013 in South Sioux City.

In Correctionville, Rodney served the community in a variety of capacities. He attended Grace United Methodist Church.

Rodney and Martha were longtime members of the Iowa-Nebraska Chapter Hudson-Essex-Terraplane (HET) Car Club making many lifelong friends attending car meets in the Midwest, across America and into Canada. Wichita and Portland were meets of note, as all family members attended.

Rodney’s passion was collecting Hudson automobiles and pickups. He started collecting lawn tractors, too, because he liked anything mechanical, and learning how it worked and how to repair it.

In 1980, Rodney and his sons completed a U. S. Navy Tiger Cruise on Eric’s ship the USS Marvin Shields FF-1066, sailing from Pearl Harbor, Hawaii to home port San Diego, California.  This was a special event because Rodney was stationed at Pearl Harbor after World War II and the trip was with his sons.

Aviation was an interest Rodney introduced and shared with his sons attending air shows and the Reno National Championship Air Races in Reno, Nevada.

Rodney enjoyed office work and numbers. He was known for his interest and kindness for all animals, especially cats and dogs.  Bingo and Yahtzee became favorites at Regency Square.

Rodney was preceded in death by his parents, his wife Martha, and a sister, Beulah Dunkelberger.

In lieu of flowers, memorials may be directed to the Siouxland Humane Society or to the Correctionville Public Library.