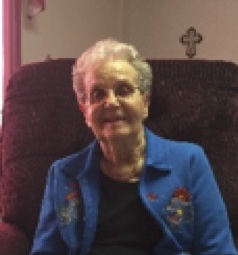 A funeral service was held on Tuesday, May 16, 2017 at 11:00 a.m. at the Grace Lutheran Church of Correctionville with the Rev. John W. Riebhoff officiating.  Burial was at the St. Paul Cemetery (Midway) of rural Battle Creek.

Betty Jean Bottjen was born on February 11, 1926, in rural Correctionville, Iowa, to Claude and Dorothy (Wright) McCleerey.  Betty was baptized and confirmed in the Lutheran faith on February 1, 1948, at St. Paul Lutheran Church, Midway.

She received her elementary education in the Woodbury county schools and graduated from Correctionville high school, earning a Normal Training Teacher’s Certificate.
On June 26, 1943, Edward Bottjen and Betty Jean McCleerey were united in marriage at the Christian Church parsonage in Sioux City, with the Rev. C. R. Dayton officiating.

After World War II, they farmed for 10 years east of Midway, Battle Creek. In 1956 they moved to Correctionville, where they owned and operated Ed’s Plumbing and Heating until retirement in 1985.

Betty also worked at the Creamery, National Tea Co., and the IGA Grocery Store.  They were blessed with 67 years of marriage and five children.

Betty was a member of St. Paul Lutheran Church, Midway, and Grace Lutheran Church, Correctionville, where she held various offices and was an active member of the Ladies Aid Society.  She enjoyed music and dancing, traveling, and crocheting, and she was an avid reader.

Betty’s passion was cooking for her family, and she enjoyed babysitting for her grandchildren.

Betty was preceded in death by her parents; her beloved husband, Edward; a brother, Wilbur (Eileen) McCleerey; and sisters Frances (Wendell) Green and Wilma (Wayne) Bowers.