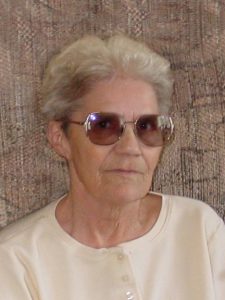 There will be a private family service at a later date.  The Oolman Funeral Home in Orange City is assisting the family.  You may express your sympathy at www.oolman.com.

Delores Madge was born on June 25, 1938, at Anthon, the daughter of Walter Edward and Viola Madge (Dicus) Short.

She was raised in the Anthon and Moville areas, where she attended elementary school and graduated from the Bronson High School.

On September 8, 1957, she married Merlin Boyd Vest in Bronson.  They made their home in Moville.

She was a cashier and shelf stocker at local grocery stores and Casey’s General Stores.

Merlin passed away on October 29, 1981 in Lawton, after more than 24 years of marriage.  Delores then moved to Arkansas for a time before settling in Orange City.

She also enjoyed country line dancing, and would teach small groups at the community center in Arkansas.  She loved her grandchildren and great-grandchildren.

In addition to her parents and husband, she was preceded in death by her siblings: Phyllis Prather, Helen Wash-burn, Frances Short, Joyce Bolles, Doris Rasmussen, Lois Smith, and Donald Short; five brothers-in-law; a sister-in-law; and eight nephews.