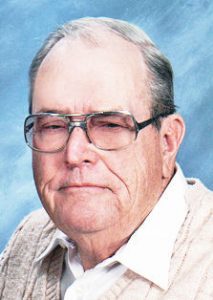 Services were held at 10:30 a.m. on Tuesday, May 23 at Elliot Creek Presbyterian Church in Bronson.

Sam Lorentz Corrie, the son of Paul E. and Elena (Lorentzen) Corrie, was born on June 4, 1928 on the family farm, outside of Bronson. He was educated in the Bronson school district, where he made many lifelong friends.

On March 16, 1946, Sam was united in marriage with Betty J. Sunderland in Dakota City.

Sam was a lifelong farmer. It was not only what he did; it was what he was.

Sam lived and worked on the same farm all of his life until moving to Char-Mac in September 2016, and then to Pioneer Valley Living and Rehab Center in December 2016. Betty died on April 15, 2010.

Sam is survived by 3 children: Jean (Noel) Plummer, Paul (Ginny) Corrie, and Michelle (Scott) Schroeder, all of Bronson; many grandchildren and great-grandchildren; and nieces and nephews, several of whom spent summers at the farm with Aunt Betty and Uncle Sam.

He was preceded in death by his parents; a daughter, Patricia; his wife, Betty; sisters and brothers-in-law, Pauline (Al) Jones and Shirley (Mel) Olson; and a daughter-in-law, Judy Corrie.

The family wishes to thank Char-Mac Assisted Living in Lawton, Iowa; Pioneer Valley Living and Rehab Center in Sergeant Bluff; and the caring and compassionate nursing staff of Mercy Health Center, all of which took such good care of him.