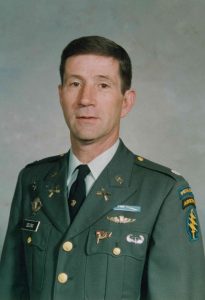 Terry James DeJong, 71, formerly of Kingsley, passed away on May 15, 2017 at Mercy Medical Center in Sioux City, Iowa. Terry had been battling cancer, and he fought a determined fight against the disease.

Services were held at 11 a.m. on Saturday, May 20, 2017 at Rohde Funeral Home in Kingsley, Iowa.  Online condolences may be sent to the family at rohdefh.com.

Terry was born on June 4, 1945 in Sioux City, Iowa, the son of the late Gerard DeJong and Betty Slocum. He was raised and educated in Sioux City, and he graduated from Riverside High School in 1963.

He married Susan Fokken on September 17, 1963. He received a Bachelor’s degree from Upper Iowa University.

His combat service took him to the Republic of Vietnam, Bosnia and Kosovo, Korea and Afghanistan at the close of his career.

He participated in many other peacetime missions during the Cold War period. Among the many awards in his career were the Bronze Star and Legion of Merit.

He spent a great deal of time restoring classic cars, and he loved working on cars. He also enjoyed woodworking, and he was a great all-around handy man.

Memorial donations in memory of Colonel DeJong can be made to the Wounded Warrior Project at https://support.woundedwarriorproject.org.