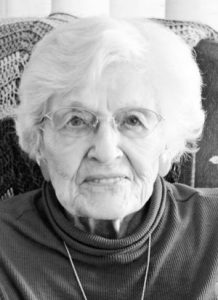 A funeral service was held at 11:00 a.m. on Saturday, May 27, 2017 at the Moville United Methodist Church. Burial was in Memorial Park.  Arrangements are under the direction of Waterbury Funeral Service of Sergeant Bluff.

Fanchon Rebecca Miller was born July 7, 1915 at the home of her parents Zula (Means) and C. Ernest Miller. The Miller home was located east of Hornick, Iowa. Fanchon was the youngest of four children.

Fanchon attended Brown Country School through the elementary grades, and then attended school in Hornick, Iowa. She lived with her siblings in Sioux City, Iowa during her sophomore and senior years of high school.

She graduated from East High in May of 1932, before her 17th birthday. She attended Wayne State College in Nebraska, and the National Businesses Training School in Sioux City, Iowa.

She worked for as a receptionist and office coordinator for Dr. James Graham, an orthopedic physician and surgeon in Sioux City, before she married.

Fanchon and Keith first lived in the home where Keith grew up. Their first child, Lyndon, was born in Sioux City, while living in their first home.

In 1945, they purchased a 160 acre farm northeast of the place where Keith grew up. Their daughters Manon and Rochelle were born while they lived on this farm one mile south of Holly Springs, Iowa.

In 1955 Fanchon and Keith purchased a farm in Arlington Township in Woodbury County, east of Moville. Keith was a grain farmer who raised horses and ponies on the Moville farm.

They traveled all 50 states, abroad to Canada (including Nova Scotia) and overseas to Europe. Keith passed away on May 30, 1993. Fanchon continued to live on the family farm.

Fanchon was preceded in death by her parents; her husband Keith; one infant son, Randall Haddock; two sisters, Audrey, Madalene, and one brother, Dean.