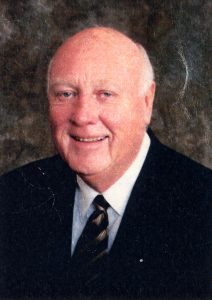 A vigil service was held on Tuesday, April 18, 2017, and Memorial Mass was held on Wednesday, April 19, 2017, both at St. Louis Catholic Church in Louisville, Colora-do. Rev. Timothy Hjelstrom served as celebrant and Debbie Vogelsberg as organist. Ellen Oasheim, Dave Davis and Katherine Greany were vocalists.

Jim Whitney of Lafayette, formerly of Boulder, was a wonderful husband, father, grandfather, and administrator. He was born December 4, 1935, in Hartington, Nebraska to Anna Schiedel and Bill Whitney.

Jim graduated from Hartington High School in 1953. He began his college career at Wayne State College, where he was an outstanding athlete. He earned ten letters in football, basketball, and track during his years at Wayne State.

Jim moved his family to Boulder in 1963 and became manager of Nichols Hall, now Cheyenne Araphao Hall, at the University of Colorado. He retired as Assistant Director of Student Facilities in 1990.

These are the facts about Jim, but he was so much more. He loved all sports and every aspect of athletic events. He loved the University of Colorado, the CU Buffs, traveling, his community, winters in Arizona — and above all, his children and family.

Jim was preceded in death by his parents, Bill and Anna, and by his brothers Merle and Don Whitney.