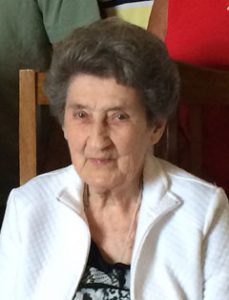 Marjorie Ann Stewart, the daughter of Theodore Daniel and Helen B. (Martin) Clark, was born on November 17, 1926 at her Grandma Martin’s house in Kingsley, Iowa.  Her family moved to Cherokee where she attended school.

On May 4, 1945, Marjorie and James W. Stewart were united in marriage at Sioux City, Iowa.  They were blessed with three children: Gloria, Barbara and Wayne.

Marjorie and Jim enjoyed traveling and spent winters in Texas and Arizona.  They also had a home in Dubois, Wyoming for five years before returning to Kingsley to care for Marjorie’s mother.  She took a position at Scootch’s, where she enjoyed visiting with people.

Marjorie was a former member of the First Church of Christ in Cherokee, where she was baptized and confirmed.  She was currently a member of the Kingsley United Methodist Church where she participated in Circle.

Marjorie was a 50-year member of the American Legion Auxiliary and the VFW Auxiliary.

Along with traveling, Marjorie and Jim enjoyed camping, walking and spending time with their grandchildren.  In her later years, she volunteered her time at the Kingsley Nursing and Rehabilitation Center.

She was preceded in death by her parents; her husband James; a great-grandson, Trevis Flewelling; two sisters, Joyce Clark and her husband Donald and Janice Jensen and her husband Orlan; and brothers-in-law Kenny Brant, Denny Kolb and Gayle Farley.