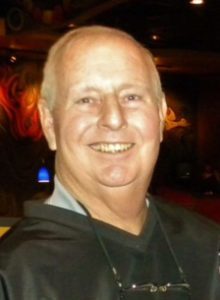 Everyone was asked to wear their “Team Marlyn” shirts to both occasions.

In 1952, the family moved to Mead, Nebraska, where he attended elementary and high school.

He graduated from Wayne State College in 1973 with a BAE in Mathematics. He taught for the next 17 years in Bushnell, O’Neill, and Seward, Nebraska.

He earned his MEd from The University of Nebraska, Lincoln in 1989 and began his administrative career the following year in Osmond, Nebraska.

He retired in 2014, as did his wife, Patricia. They moved to Omaha.

He was an avid golfer and played nearly every day until he was diagnosed with breast cancer a few months ago.  He also enjoyed trout fishing in the Verdigre Creek near Royal, Nebraska.

He and Pat traveled the country after they retired.  They loved hitting the road in her red Mustang.  Together they visited all but two of the lower 48 states — most of them after retiring.

In addition to his wife, he is survived by one brother, Dennis (Donna) of Lincoln; daughters Barbara (Darin) Lovercheck of Humphrey; and Jill (Steve) Peterson of Omaha; sons Christopher (Jenny) of Plymouth, Charles (Suzanne) of Omaha, and Steven (Grace) of Bruce Crossing Michigan; and his step-daughter, Tonja (Aaron) Taylor of Plattsmouth.

He is also survived by 21 grandchildren, 7 great-grandchildren and his special friends in the “B” Club.

He was preceded in death by his parents; a sister, Sharon Kay; and an infant daughter.

In lieu of flowers, memorials may be given to the American Cancer Society or the Alzheimer’s Association.