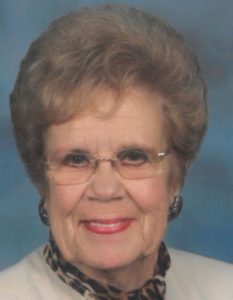 Shirley M. Herbold, 91, has peacefully departed to attend her well-deserved “Homecoming Celebration” hosted by her Creator, her husband, family and friends.  With heavy but loving hearts, we bid farewell to the most beautiful and loving mother that the Good Lord could have given us.

Services will be 10:30 a.m. Wednesday at Morningside Lutheran Church in Sioux City, with the Rev. Darrin Vick officiating. Interment will be in Memorial Park Cemetery under the direction of Meyer Brothers Morningside Chapel. Visitation will be 4 to 8 p.m. Tuesday, with the family present 6 to 8 p.m., and a prayer service at 7 p.m., at the church.

Shirley Mae (Herum) Herbold was born April 28, 1926, to LeRoy and Myrtle (Farrer) Herum in Moville, Iowa. She and her sister, Corrine attended and graduated from Moville High School. Shirley then received her teaching certificate from Wayne State College and taught in rural Moville.

Shirley met the love of her life — William Robert “Bob” Herbold, “a handsome Pierson boy” — at the Woodbury County Fair in Moville. They were married on Aug. 18, 1945, in Moville while Bob was at home on furlough from the Army Air Corps.

For a brief time, Shirley and Bob spent time in Colorado Springs. While they were there Shirley worked as a Sterilization Technician at Glockner-Penrose Hospital. After returning to the area, they purchased their farm on Highway 20 in Lawton, Iowa, where they lived for 60 years.

Shirley supported Bob through his many businesses with real estate and auctioneering. They built a drive-in restaurant, The Homestead; built the housing development, Skyview Acres; remodeled and sold homes; and built the Quad-State Auction at East Acres, as well as Theo’s Steakhouse.

After Bob’s passing in 1989, Shirley kept busy with the community and many groups, clubs and activities. She was a founding member of the Dancing Grannies and Grandpas and was involved with Fan Club, Morningside Lutheran Church Choir, Woodbury County Fair, and would lead “Sing Along” at Countryside Retirement Home.

Shirley enjoyed spending time with her loving family and loved a good practical joke. She could always be found watching her kids and grandkids getting ready for the fair with their horse projects.

Although she admitted that cooking did not make the top of her talent list (except for her chocolate chip cookies and banana bread), she excelled when it came to singing, playing the organ and hunting for the best bargain.

Shirley loved doing projects and was an avid doll collector. She was great at convincing her grandkids to help her “paint fence and mow lawn.”

Shirley believed in Jesus, supported and loved her family, was honest and full of compassion. She was a very strong woman and a wonderful role model. Shirley was the epitome of class.

She is preceded in death by her husband, Bob; daughter-in-law, Marge; her parents; and two sisters.

In lieu of flowers, memorial donations will be made in Shirley’s name to Shriners Hospitals for Children as well her other favorite charities.