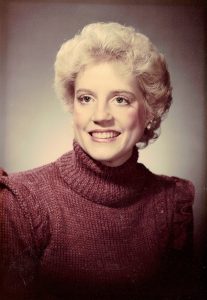 Stacy Leigh Hayworth Groff, 55, of Omaha, formerly of Anthon, IA  the youngest child of Ron and Jerane (Rossow) Hayworth, went to be with her loved ones in Heaven.

She lived bravely and fully with a strong Christian faith.  Despite many health challenges, she achieved most of her goals, many of them related to being of service to others.

Stacy was born in Sioux City, Iowa. She was baptized and confirmed at Trinity Lutheran Church in Anthon, where she was a lifetime member.

She graduated as valedictorian with the Anthon-Oto class of 1980. In high school, she participated in band, flag corps, sports, and cheerleading.

She graduated from Morningside College with a BS in Biology in 1984, and from the Creighton University College of Allied Health Professions with a specialty in Respiratory Therapy in 1985.

She worked as a registered respiratory therapist at Mary Lanning Hospital in Hastings, Nebraska for one year and at Marian Health Center (now Mercy Medical) in Sioux City for five years until losing her vision.

After a kidney/pancreas transplant and some time of recovery at home with her parents, she spent 9 months at the Orientation Center of the Iowa Department for the Blind, learning many adaptive skills, especially those related to computer technology.

She then moved to Omaha, where she attended the University of Nebraska and earned a Master’s Degree in Social Work in 1998.  While at UNO, she was named the “Graduate Student of the Year.” She also received the Outstanding Graduate Helen Hansen Scholarship.

In 1997, she was awarded the top scholarship at the national convention of the National Federation of the Blind and was accepted into “Who’s Who Among College and University Students”.

She became a Licensed Clinical Social Worker and practiced in that field for about five years.  She also was a certified massage therapist and had her own practice.  She was a certified item writer for the national social work licensing exam.

She was a certified Hospice volunteer, and she also volunteered to present programs in schools for the National and Nebraska Kidney Foundation.

She went to Washington D.C. twice as a representative from the Nebraska and Iowa Federation of the Blind, to address legislation related to issues of blindness.

She volunteered with the Juvenile Diabetes Association and for a time served on the board of the Nebraska Foundation for Visually Impaired Children.  Declining health forced her to abandon plans to be trained as a CASA volunteer.

In 2000, Stacy married, Craig Groff, and they made their home in Omaha. They were able to enjoy trips, concerts, family visits, and several bus tours as Nebraska football fans.

Family was very important to Stacy. She enjoyed family vacations and gatherings, holidays, and shopping for Christmas and birthday gifts — especially for her niece and nephews.

She was preceded in death by her beloved “Daddy” and her dear nephew, Jeff; grandparents Ernst and Henriette Rossow and Vester and Wilma Hayworth; her father-in-law, Eugene Groff; and several aunts, uncles and cousins.

Stacy requested memorials be donated to Nebraska Organ Recovery, the Humane Society and the Open Door Mission of Omaha.