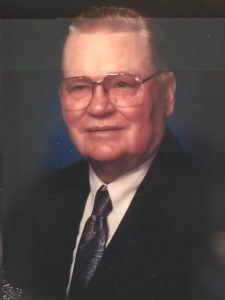 A funeral service was held on Saturday, June 10, 2017 at 10:00 a.m. at the United Methodist Church of Moville with the Rev. Janet Rieckhoff-Faris officiating.  Burial was at the Arlington Cemetery of Moville, with military rites conducted by the American Legion Wink–Sparks Post #303 of Moville.

The Nicklas D. Jensen Funeral Home of Moville is in charge of the arrangements. Online condolences can be made at nicklasdjensenfh.com.

He was married to Eunice (Fuson) Janssen on March 20, 1954, in Worthington, Minnesota.

Gene farmed from 1954 until 2016, when he was injured in a fall.  He was president of the Woodbury County National Farmers Organization for many years, and he was a member of the South Sioux City Eagles.

We would like to express our appreciation to the staff of the Good Samaritan Society of LeMars.  The staff and administration took excellent care of Gene and made his final days peaceful.