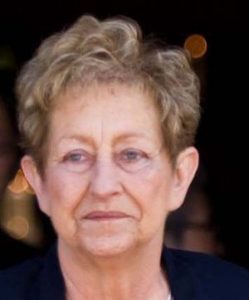 Services will be held at 11 a.m. on Thursday, June 15 at the Lawton Presbyterian Church. Burial will be at Banner Township Cemetery in Lawton.  Arrangements are under the direction of Waterbury Funeral of Sergeant Bluff.

Joan Geraldine Swanger was born September 2, 1946, in Le Mars, Iowa, the daughter of Vernon and Joyce (Peterson-Lee) Goodvin. She graduated from Le Mars High School in 1964.

In the early 1970s, they lived in Sioux Falls, South Dakota for awhile. Then they moved back to the Bronson, Iowa area.

Joan worked at several businesses during the years. She retired in 1994 from the Sioux City County Club.

Joan “Jo” Swanger was a sweet, sassy and spunky gal who always found the humor in life — even when there wasn’t a lot to laugh about.

She had an adventurous spirit and a huge heart. She loved to travel, shop, garden, scrapbook and take pictures.

Joan loved to spoil her grandchildren (they would call her grandma Coo-Coo), as well as her two cats, Minnie and Mittens.

Joan was a member of the Lawton Presbyterian Church.

She preceded in death by her parents and one brother, Bill Goodvin.