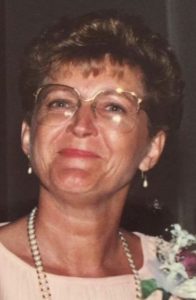 Services were held on Tuesday, June 27 at 6 p.m. at Moville United Methodist Church with Neil Peck officiating. Arrangements are under the direction of Rohde Funeral Home in Kingsley, Iowa. Condolences may be directed to the family at www.rohdefh.com.

Marcia was born April 19, 1943 in Anthon, Iowa to William (Bill) and Marcella Herbold Clausen. They moved to Kingsley when she was young, and she graduated from Kingsley High School in 1961.

Of all the jobs she had throughout her lifetime, being a wife, parent, and grandparent were her greatest.

She married Larry Walker on December 9, 1961 at First Lutheran Church in Kingsley, Iowa. Marcia and Larry lived in Moville and raised three boys — Kirk, Kyle, and Kelly — there.

Marcia was a committee member and volunteer for Moville Days from the beginning. She enjoyed many years of work and planning for the annual event, which was one of her biggest joys. Unfortunately, she was not able to enjoy her role as Grand Marshal of her beloved Moville Days Parade this year due to her illness.

She was also active with her husband Larry in giving many years of volunteer time to the Abu Bekr Shrine Circus. In her later years, she worked delivering flowers for Sunnybrook Flower Shop.

Her greatest enjoyment came from her grandchildren’s many activities and cheering for her beloved Iowa Hawkeyes. You rarely saw her not wearing something black and gold or blue and white, representing the Woodbury Central Wildcats.

She also enjoyed spending time with her many nieces, nephews, and great nieces and nephews.

Survivors include her three sons: Kirk and his wife Nancy of Bellevue, Nebraska and their children, Alex and Olivia Walker and Alissa and Caleb Hanish; Kyle and his wife Nancy of Wheaton, Illinois and their children Cecilia and Nick; and Kelly of Moville and his children Austin and Tyler; one sister, Marilyn Richardson and her husband Keith of Kingsley; three brothers and their wives: Larry (Butch) and Sharon Clausen of Spencer, IA; Dennis and Debbie Clausen of Ida Grove, IA; and Darold and Carolyn Clausen of York, South Carolina; two sisters-in-law: Darnell Clausen of Kingsley, IA and Jan Walker of Ankeny, IA; and one brother-in-law, Russell Walker and his wife Muriel of Moville, IA.

Marcia was preceded in death by her husband Larry; her parents, William and Marcella Clausen; one brother, Clair Clausen; brothers-in-law Loren Walker and his wife Karen, and Ronald Walker; her in-laws, George (Lew) and Rosalie Walker; a niece, Leslie Walker; a nephew, Randy Walker; and a great-nephew, Austin Ayers.

In lieu of flowers or memorabilia, the family requests that memorials be directed to the June E. Nylen Cancer Center in Sioux City.