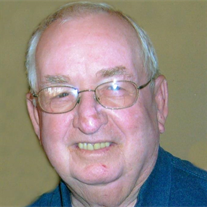 Jack Leroy Kooker was born May 6, 1935 in Des Moines the son of Kenneth and Lenora (Olsen) Kooker. Growing up, Jack attended school in Des Moines and Moville where he graduated from Moville High School in 1954.

Following high school graduation, Jack enlisted in the United States Army. He proudly served his country until he was honorably discharged in 1956.

While attending Westmar College in Le Mars, Jack met the love of his life, Sally Shearer. On August 19, 1961, Jack was united in marriage to Sally Shearer in Kingsley. Together, they were blessed with four children: Mark, Jeffrey, David and Ann.

Jack was currently a member of St. Mary’s Catholic Church in Storm Lake. He participated in Knights of Columbus and was a Grand Knight and also on the CCD Board.

Jack worked as the elementary principal for Storm Lake Schools for many years. He served on the Red Barn Board (from 1980-1986), Storm Lake City Council (from 1990-1993), Lions Club, Elks Lodge Member and was also on the Faith, Hope and Charity Board.

Throughout the day, Jack would check emails and Facebook to ensure he was staying in touch with family and friends. One could find Jack giving advice, storytelling, or making a difference in the life of a child.

He thoroughly treasured spending time with his grandchildren and will be deeply missed by all who knew and loved him.

Jack was preceded in death by his wife, Sally Kooker; his parents, Kenny and Lenora Kooker; brothers Earl and John Kooker; and parents-in-law Clifford and Dorothy Shearer.