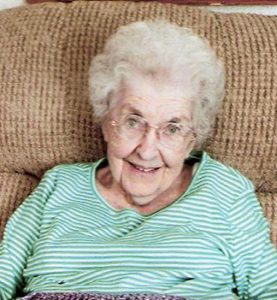 Services will be at 10:30 a.m. on Saturday July 1, 2017 at First Lutheran Church in Kingsley, Iowa with the Rev. Duane Miesner officiating. Burial will be in Greenwood Cemetery in Pierson. Visitation will be after 2:00 p.m. on June 30, 2017, with family present from 6-8 pm and a prayer service at 7:00 pm at Johnson-Earnest funeral Home in Kingsley.

Caroline Emma Christophersen was born August 29, 1917 in Pierson, Iowa to Burt & Frieda (Albers) Petersen. She was baptized and confirmed at First Lutheran Church in Kingsley, Iowa and graduated from Pierson High School.

On September 9, 1936 she and Henry Herman Christophersen were united in marriage in Rock Branch, Iowa. They made their home on a farm west of Pierson and were blessed with 69 years of marriage. Henry passed away December 14, 2005.

Church and family were most important to Caroline. She was an active member of First Lutheran Church, a member of the Ladies Aide and the Martha Circle. She enjoyed reading, sewing and reminiscing about days gone by. Caroline especially enjoyed time spent at their cabin with family.