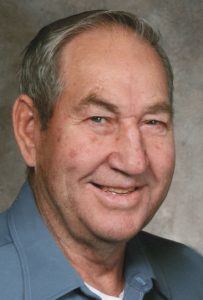 Services were held at 10:30 a.m. Monday, July 3 at Bethel Lutheran Church in Lawton, with the Rev Ralph Shorey officiating. Interment followed in Banner Township Cemetery near Lawton.  Arrangements were under the direction of Morningside Chapel, Christy-Smith Funeral Homes.

Irwin and Wilma Carol Schmidt were united in marriage on Jan. 22, 1961, at Zion Lutheran Church in Manning, Iowa. The couple moved to rural Ida Grove, Iowa, following their marriage and farmed in the area for more than 32 years, retiring from farming in 1993. In September of 2009, the couple moved to Lawton to be closer to their family.

Irwin loved going to auctions and was an avid collector. He always attended his U.S.S. McKean reunions and attending his grandchildren’s sporting events. Most of all. Irwin just enjoyed talking to everyone he met.

He was a member of Bethel Lutheran Church in Lawton, the American Legion of Lawton, and the VFW Post in Manning.

Irwin’s life will always be remembered by his wife of 56 years, Carol of Lawton, his sons, Dan and his wife, Rose of Lawton, and Scott of St. Louis Park, Minnesota. He also is survived by his two grandchildren, Kristi Loofe and Michael Grau; and his sister, Louise Troeh; along with several nieces, nephews; and friends.

He was preceded in death by his parents; two sisters; and three brothers.

Memorials in Irwin’s name may be made to either Hospice of Siouxland or the Lawton Ambulance Service.