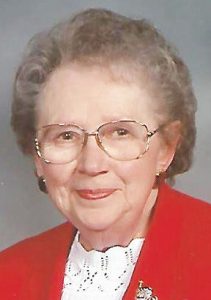 In accordance with her wishes, the body will be cremated with no funeral or prayer service. Online condolences may be expressed at www.meyerbroschapels.com and sympathy cards may be sent to Meyer Brothers Morningside Chapel (6200 Morningside Ave., Sioux City, IA 51106).

She will be buried in Calvary Cemetery with her first husband, Robert Olson, the father of her eight children. She was also married to Dean Cuthbert and Elzie Bottjen.

She was born in Alcester South Dakota to Paul and Ella Leona Erichsen. She was baptized and confirmed at Peace Lutheran Church, and she attended Alcester School.

She worked for her father’s business, the rationing office, and Lee Drug Store in Alcester.

She was preceded in death by an infant son, David; her husbands; her parents; her grandparents, Edward Fickbohm (Matilda) and William Erichsen (Bertha); many aunts and uncles; a brother, Dale Ericksen; a sister, Gayle (James) Nickels; and a brother-in-law, Ross Armstrong.