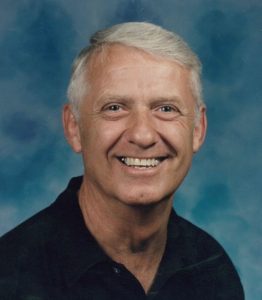 Services were held at 11 a.m. on Saturday, July 15, 2017 at Rohde Funeral Home with the Rev. Bob Blair officiating.  Online condolences may be made to the family at www.rohdefh.com.

Ed was born in Maxwell, Iowa, the son of Leslie D. and Winifred L. (Veneman) Coughenour, on July 14, 1929. He attended school in Maxwell, graduating with the class of 1947.  After graduation,

Ed was united in marriage to Dolores Skartwed August 27, 1953 in Emmetsburg, Iowa.

Ed attended Buena Vista College in Storm Lake, Iowa, graduating in 1954 with a degree in Education. That same year he began teaching and coaching at Kingsley-Pierson High School, which spanned 52 years.

Ed coached for 50 seasons since founding the girls’ softball program at Kingsley-Pierson High School in 1956.

His team first qualified for the state tournament in 1959, and they made state tournament appearances 25 times in fall and summer softball under his guidance.  He was one of the winningest softball coaches in Iowa’s history with more than 1,500 victories.

In 1987, Ed was honored by the National High Schools Association as Coach of the Year.

Ed was a member of United Church of Christ in Kingsley, serving as church treasurer, as well as the National High School Coaches Association.

Ed was preceded in death by his parents; brothers Forest and Vernon Coughenour; a sister, Katie Ochanpaugh; and a daughter-in-law, Cindy Coughenour.