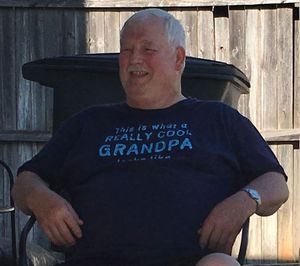 Visitation and a celebration of Michael’s life were held from 5:00-7:30 p.m. Wednesday, May 24, 2017 at the Andrews Funeral Home in Belmond, Iowa. Pastor Brian Hoffman from the Kanawha Christian Reformed Church presided. Full military honors were provided following the visitation.

Michael was born October 28, 1952, at Sioux City, Iowa, the son of Donald and Winnie (Bolles) Countryman.

Following his education, Mike served his country in the service both at the conclusion period of the Vietnam War. He continued for a number of years until 1976, when he was honorably discharged as a medical administrative specialist.

Mike was united in marriage to Ellen Janssen on November 20, 1981 at Goldfield, Iowa.

Throughout his entire life, he was a hard-working and dedicated employee in a variety of companies and roles.

Mike had been a bridge superintendent during times in Texas. He then spent many years in maintenance at Eaton Corp. in Belmond, Iowa and Kiefer Built in Kanawha, Iowa. More recently, he was employed with Michael Foods in Britt, Iowa, where he was looking forward to retirement later this summer.

Mike had lived in various places throughout this life journey, including Belmond; El Paso, Texas; Parkman, Wyoming; and Kanawha.

Throughout his years he enjoyed the fruits of his labors, spending times with his wife, family and grandchildren and friends. His pastimes and hobbies were many. In earlier years, he loved to spend time both on his own and with his son building and restoring old trucks, cars, and muscle cars.

Mike loved the excitement of NASCAR and the solitude of camping. He was a terrific cook and was known as “The Grill Master.”

Mike had a fondness for horses. He was also an avid Vikings fan, and he looked forward to hunting excursions when the opportunity arose.

Those who had the privilege of crossing in his footsteps will reflect on his memory as a man who was known as a man of few words. But when he spoke, he was usually “spot on” in his thoughts, as he was able to take in everything that happened around him. His gentle demeanor and love for his family will be cherished as his legacy lives on in their hearts and minds.

He was preceded in death by his parents and by other extended family and friends.