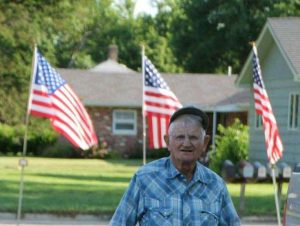 A funeral service was held at 10:30 a.m. on Wednesday, August 2, 2017, at the United Methodist Church of Anthon, Iowa. Rev. Sheryl Ashley officiated. Committal services followed in the Fairfield Cemetery (Rock Branch) of rural Correctionville, Iowa, with military rites conducted by the McNiff Unit 389 of the American Legion of Anthon, Iowa.

Shortly after graduation, Kenneth was drafted into the United States Army. Kenneth honorably served his country for two years during the Korean War. Upon being discharged, he returned home to Anthon, Iowa.

On June 6, 1954, Kenneth married Mary E. Livermore from Oto, Iowa, in the United Methodist Church of Oto. The couple were blessed with two children: Debra and Bryan.

Kenneth worked as a farm hand and a construction worker. He later worked for Woodbury County as an equipment operator maintaining Woodbury County gravel roads for 28 ½ years before retiring in 1995.

Kenneth enjoyed attending his son Bryan’s and his grandchildren’s sporting events, along with his wife Mary. He also enjoyed hunting, fishing, camping, gardening, being with his cats and dogs, and watching baseball. He was always there to lend a helping hand.

Kenneth was a faithful member of the United Methodist Church of Anthon, Iowa. He was a 50-year member of the Anthon American Legion and the local Masonic Lodge.

Kenneth was preceded in death by his parents, Lyle and Lola Hill; great-grandsons Bryton and Brenden Hill; and his brother-in-law, Marvin Clause.