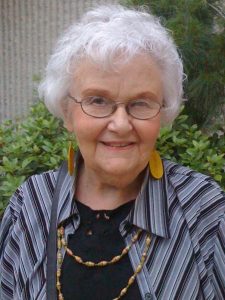 Services will be held at 10:00 a.m. on Saturday, August 12, 2017 at Pierson United Methodist Church in Pierson, Iowa, with burial following at Greenwood Cemetery in Pierson.  There will also be a meal following the service at the Pierson Community Center.

Online condolences may be posted to the Warren-McElwain Mortuary at www.warrenmcelwain.com

Carol was born on April 12, 1930 in Alta, Iowa the daughter of LeFluer (Hille) and Leslie Hatch.

She graduated from Alta High School in 1947. She attended Morningside College in Sioux City, Iowa, majoring in music education.

She married Donald Lee Johns on June 18, 1950 in Alta, Iowa. The couple farmed the family farm near Pierson, Iowa until 1983.

She was very active in her church in Pierson, where she directed Jr. and Sr. Choirs for many years. She will be remembered as the director and/or soloist of many community choirs as well.

She worked in retail, domestic cleaning, and she and her husband managed Tanglewood Apartments until 1994.  After that, she was an Administrative Assistant at Douglas County Senior Services from 1995-2010.

She was a member of the Mustard Seed Church until she moved to Wyoming in 2015.

Memorial contributions may be made in her name to the Carol Johns Memorial Fund.  They may be sent in care of Warren-McElwain Mortuary.