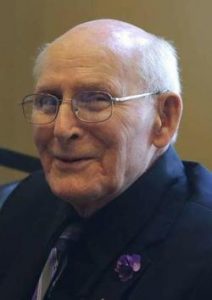 Memorial services will be held on Friday, August 4 at 11 a.m. at the Grace Lutheran Church in Correctionville. Iowa. Pastor John Riebhoff will officiate. Burial with military rites will be in the Sunset View Cemetery at Washta, Iowa, directly following the church service.

Online condolences can be left at www.boothbyfuneral.com

Ed was born June 9, 1927 near Washta, Iowa to Jack & Edwina (Flisher) Beazley. He attended Washta Schools. He was a veteran of World War II, serving in the U.S. Navy on the USS Miami CL 89.

Ed was married to Lila Backhaus on December 3, 1947 at the Pilgrim Lutheran Church in Quimby, Iowa. He farmed all his life, retiring in 1997.

He was a member of the Grace Lutheran Church in Correctionville where he had been Sunday School Superintendent for many years. He was also a member of the Washta American Legion.

He enjoyed woodworking, fishing, playing cards, animals on the farm until they got outside the fences, watching the Minnesota Twins and spending time with family and friends.