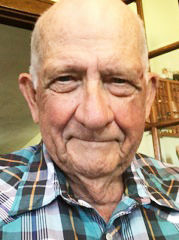 Gary G. Zediker, 80, of Cushing, passed away Tuesday, August 1, 2017, at the University of Nebraska Medical Center in Omaha.

Services were held at 11 a.m. on Saturday, August 5 at First United Methodist Church in Cushing, with the Rev. Ron Rice officiating. Burial was in Mount Hope Cemetery of Mapleton, Iowa, with military rites conducted by the American Legion F. Roger Baumann Post 624 of Cushing.

Arrangements are under the direction of Nicklas D. Jensen Funeral Home in Holstein, Iowa. Online condolences can be made at www.nicklasdjensenfh.com.

Gary G. Zediker was born on June 26, 1937 to Maurice K. and Wanda A. (Cameron) Zediker. He was a graduate of Mapleton High School in 1955. Then he graduated from Wayne State University with a BS and MS in industrial arts.

He was a member of the National Guard as a staff sergeant.

Gary was united in marriage to his wife Kay on Sept. 3, 1961 in Correctionville, Iowa. They were blessed to celebrate 55 years of marriage. To this union, two children were born.

Through the years, Gary worked at Wilson Trailer Co. in Sioux City; as a teacher at Central High School in Sioux City; and as an insurance claims manager in Agriculture Farm Insurance.

He lived near Mapleton until graduating and spending a year in Ames, Iowa. Then he moved back to the Siouxland area until he was 30 years old.

He then moved to several places, including Aurora, Colorado; Highland Ranch, Colorado; Santa Rosa, California; Turlock, Californ-ia; Spokane, Washington; St. Joseph, Missouri; and back to Cushing, where he had been living for the past 16 years.

Gary is a member of the Masonic Lodge, 32nd Degree Mason at Landmark Lodge A.F. and A.M. in Sioux City, and Sioux City Consistory 32nd Degree.

He was a member of the American Legion F. Roger Baumann Post 624 of Cushing and the Farm Bureau.

He loved spending time with his grandchildren, and he loved his winters with Kay in Arizona, camping in his motor home.

He was preceded in death by his parents, Maurice and Wanda.