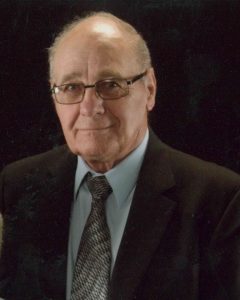 Glen E. Schlotman, 79, of Kingsley, passed away Thursday, August 3, 2017 at the University of Nebraska Medical Center in Omaha, Nebraska.

Glen graduated from Bronson High School in 1957. He entered the United States Air Force in October 1957 and served overseas until his honorable discharge in February of 1961.

Upon returning, he began farming near Sergeant Bluff when he met Linda Ann Nelson. They were united in marriage on February 27, 1965 at Immaculate Conception Catholic Church in Sioux City, Iowa. They farmed in rural Sioux City for 9 years until moving to the Kingsley area, where he purchased the current Schlotman Farm in 1973.

Glen retired from farming in 2013, and he and Linda moved from the farm to their current home in Kingsley.

When Glen was not farming, he spent his free time with his family and friends. Glen especially enjoyed time with his grandchildren: watching their games, rocking them to sleep, giving them rides on his tractor, or making them laugh.

Glen loved woodworking. He had a gift for making items for the church, his house, and his friends in Kingsley out of walnut and ash trees from his farm.

Glen enjoyed traveling with his wife Linda to see new sights in Alaska, Hawaii, China, Texas, Wisconsin and many other destinations.

He was an active member of St. Michael Catholic Church in Kingsley, serving as a Eucharistic minister and funeral usher. He was also a fourth-degree member of Knights of Columbus and served one term as Grand Knight.

Glen was preceded in death by his parents; one brother, Stanley Schlotman; and two sisters, Dorothy Dean and Edith Ahlquist.

In lieu of flowers, memorials may be directed to Save the Windows project at St. Michael Catholic Church, in memory of Glen.