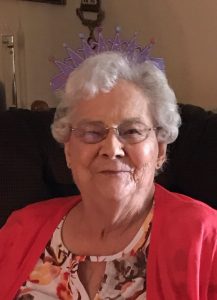 A Celebration of Life for Joyce was held Friday, August 11 at 11 a.m., with family present at 10 a.m. at the Anthon United Methodist Church in Anthon, Iowa.    Becker Hunt Funeral Home is in charge of arrangements.

She graduated in the class of 1944 at Lawton High School. Then she attended Buena Vista College for two years and taught at Coon Rapids for two years.

On September 12, 1948 she married the love her life — Wallace Corrie in Lawton.  The couple farmed west of Anthon and raised their family there.

She continued her education at Morningside College earning her degree and taught in Climbing Hill for one year and then in Anthon, giving many kindergarten children a wonderful start in their education. She married Pat Phillips in 1977.

She was active in her community promoting bingo, enjoying golf and cards especially bridge.

She supported her church and the American Legion and was a Legion Auxiliary member of more than 75 years, holding every office.  She was a member of Eastern Star for 50 years, and she achieved the status of Worthy Matron.

She was a supporter of the political process, and having her picture taken many times with George W. Bush were proud moments for her.

She was preceded in death by her husband Wallace in 1972; a son, Thomas (Coz); a grandson, Michael; her brother, Gene; her sister-in-law, Olive; and her sister Roberta and brother-in-law Wencil.

In memory of Joyce, we ask that you donate to the Anthon Community Center. Saving the community center was a years-long crusade of Joyce’s.