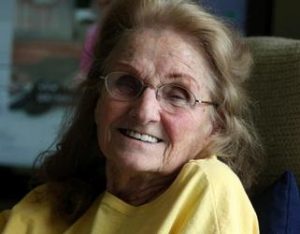 Per her wishes, the body has been cremated. Private family services will be held at a later date. Arrangements are under the direction of Waterbury Funeral Service of Sioux City.

Gilda was born on Sept. 3, 1927, in Westerly, R.I., the daughter of Sidney and Hilda (Unkuri) Hindle. Gilda married William J. Mize on June 7, 1945 and together they had five children.

Gilda was a homemaker and loved taking care of her family. She also worked part-time at Younker’s over the years especially at Christmas time.

She enjoyed drawing and painting pictures, trips back to Rhode Island to visit family and spend time at the beach, cooking and shopping. Most importantly, Gilda loved life.

Gilda was preceded in death by her parents; her husband, William J. Mize Jr; and her sons-in-law, Charles Wilcox and William McKenna.