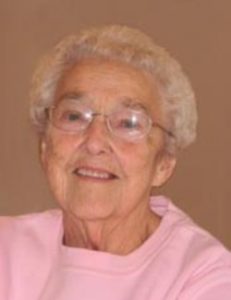 A funeral Mass was held at 10:30 a.m. Saturday, August 19, 2017 at the Church of the Nativity Catholic Church. Burial was at St. Mary’s Catholic Cemetery in Oto, Iowa.

Mae worked for the Lawton-Bronson Schools for 37 years, as a cook at the Bronson school.

Her grandchildren were her life. She enjoyed spending time with them and going to all of their activities. She loved visiting with people and always opened her home to her friends and family.

Mae is best known for her cooking. She won several Best Baker awards for her famous cookies and homemade buns at local auctions.

She was a member of the Church of the Nativity Catholic Church.

She was preceded in death by her parents; husband, Herald; four brothers: Leo, Nick, Henry, and Joe; and three sisters: Margaret, Anne, and Kate.