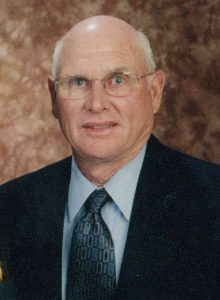 Services were held at 10:30 a.m. on Saturday, August 19 at First Lutheran Church in Kingsley, Iowa with Rev. Duane Miesner officiating.  Burial was at Kingsley Cemetery.  Online condolences may be sent to rohdefh.com.

Wayne Earl Pfaffle was born in 1935 in Le Mars, Iowa, the son of Earl and Edna (Knight) Pfaffle.  Wayne grew up on the farm that he and his wife Janice now live on.  He graduated from Kingsley High School in 1953.

After graduation, he did what he loved to do, which was farming on the family farm.

On August 15, 1954, he married Janice Mathers at Trinity Lutheran Church in rural Marcus, Iowa.  After their marriage, they lived and raised their family on the Pfaffle farm.

Wayne was a member of First Lutheran Church in Kingsley, where he was an usher and a member of the Church Choir, which he thoroughly enjoyed.  He enjoyed fishing whenever he could find the time. He was very fond of time with his family.

Wayne was a very dedicated farmer, husband and father who always found time to spend with his family to enjoy birthdays, anniversaries, school and church activities.

Wayne was preceded in death by his parents.