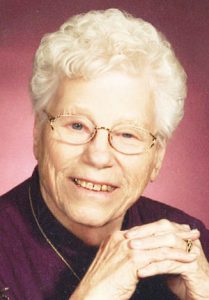 Services were held at 10:30 a.m. on Monday, August 28 at St. John Lutheran Church in Climbing Hill, Iowa, with the Rev. David Schoop officiating. Burial was in Westfork Township Cemetery in Climbing Hill. Online condolences can be made to the family at www.christysmith.com.

During her high school years, she clerked at the local grocery store in Anthon and was also a bookkeeper at the John Deere Co. in Anthon.

On September 23, 1945, she married Verlin Fred Schumann. They farmed in the Anthon area until 1955, when they moved to Orange, California for a few years. They returned to Sioux City in 1958 becoming members of St Paul’s Lutheran Church.

In 1964, they managed the Elmdale Motel in Sioux City, then in 1970 they moved to Salix, Iowa. Arlene worked for Tupperware and Otis Elevator in Sioux City.  Upon Verlin’s passing in 1986, Arlene moved to Sioux City.

She married William Gregg Snyder in 1991 and moved to Alton, Iowa until 2007. They enjoyed camping and golfing until Gregg’s passing. She then moved to Moville.

Arlene enjoyed being a homemaker and caring for her family. She was self-taught at many crafts — crocheting, knitting, tatting, counted cross stitch, and embroidery, just to name a few.