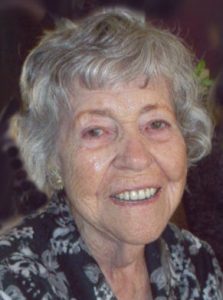 Arrangements are under the direction of Rush Family Care Service in Onawa. Condolences may be left online for the family at www.rushfamilycareservice.com.

Geraldine Eleanor was born in Sloan, Iowa, the daughter of Fred and Ermal (Bowen) Gallagher. She graduated from Hornick High School.

Following graduation, she worked in bomber plants in Omaha, Nebraska and Baltimore, Maryland during World War II. She then returned to Omaha, where she worked for Northwestern Bell Telephone Company for many years until her retirement.

Survivors include two nephews, Fred and his wife Karen Carr of Hornick and Daryl and his wife Barbara Carr of Moville, Iowa; three nieces: Kay and her husband Ed Tucker of Council Bluffs, Iowa; Anita Gerum of Onawa, Iowa; and Carol Hunter of Caldwell, Idaho; and many great-nieces, great-nephews, cousins, other relatives, and friends.

She was preceded in death by her parents, Fred and Ermal Gallagher; her husband, Al Lynn; one brother and his wife, Frank and Lucille Gallagher; and two sisters and their husbands, Madge and Larry Solorio and Mildred “Millie” and Mike Carr.