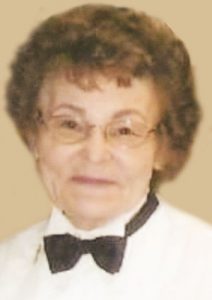 Services were held at 10 a.m. Saturday, September 2 at Elliott Creek Presbyterian Church in Bronson. Interment was in Memorial Park Cemetery in Sioux City.

Patricia was born on May 20, 1932 in Pierre, South Dakota, the daughter of Floyd & Beulah (Leslie) Provancha. At a young age, the family moved to Eugene, Oregon, where she attended and graduated from Eugene High School.

She was united in marriage with William B. Smith on July 11, 1952 in Butte, Montana. Mr. Smith preceded Patricia in death on October 5, 1990 in Sioux City.

Following their marriage, the family lived in Butte. Then they moved to the Sioux City/Bronson area from 1953 through 1970. The family than moved to Grand Island, Nebraska until 1979, when they returned to Bronson.

Patricia formerly worked at the Hilton Inn and the Sioux City Convention Center. She was currently employed with Banquet Service at the Marina Inn and Conference Center in South Sioux City. She loved her job and always looked forward to seeing her coworkers.

She was an active member of Elliott Creek Presbyterian Church, where she was baptized by Dr. Robert Peters. She was always baking pies for the church booth at the Woodbury County Fair.

She enjoyed crocheting, making afghans for friends and family, shopping with Jeanette at the local secondhand and antique stores and cooking for her family. She was very fond of her pets.

Her life will always be remembered by her children, who include her sons, James R. Smith and Jerry H. Smith; her daughter, Jeanette Smith; her grandchildren and great-grandchildren; and a brother, Jim Leslie.

She was preceded in death by her parents; her husband, William; three sons: Robert D. Smith, Jack W. Smith and Joey W. Smith; and four sisters.  Memorials may be made to Elliott Creek Presbyterian Church in her name.