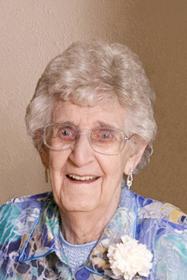 A funeral service was held at 2:00 p.m. on Friday, August 25, 2017, at the St. Paul Lutheran Church of Ida Grove, Iowa. The Rev. Richard A. Salcido officiated, with committal services in the Schaller Cemetery of Schaller, Iowa. The Christensen – Van Houten Funeral Home of Ida Grove, Iowa was in charge of funeral arrangements. Condolences may be sent online at www.christensenvanhouten.com

On a beautiful spring day in 1922, a very pregnant Katherine Sharkey was taking a walk. As she observed the wild roses alongside her path she knew what she would name her child if blessed with a daughter.

On Saturday, June 3, 1922, in rural Danbury, a baby girl was born to James and Katherine (Redenius) Sharkey. She was the 10th of 11 children and was given the name Rosella Maxine.

Rose was baptized into the Lutheran faith and grew up in the Danbury and Anthon area attending country school. She married Eugene Crum. To this union, two sets of twins were born. They later divorced.

On October 12, 1952, she married Frank Franzkowiak. They lived near Arthur then moved to their farm southwest of Schaller in 1956. They were blessed with three children.

In 1974, they moved south of Galva before retiring to Ida Grove in 1987. Rose continued to live there until her mobility forced her to move to assisted living in 2013. The final month of her life was spent at Eventide in Denison, Iowa.

The last surviving member of the James Sharkey family entered into heaven on August 18, 2017. She lived to be the oldest of the entire family, attaining the age of 95 years, 2 months and 15 days.

Rose enjoyed country living. She was a hardworking farm wife, helping with the farm chores, raising chickens and gardening. She enjoyed neighborhood parties and family activities. There was always time for coffee & playing with the grandchildren.

Frank & Rose took many trips to various states and visited the Vietnam Memorial Wall in Washington, D.C. Rose enjoyed music her entire life, and she was an avid doll collector.