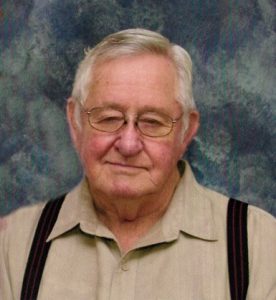 Services were held at 11:00 a.m. Saturday, Sept. 9, 2017 at Rohde Funeral Home in Kingsley, Iowa with Rev. Ken Kraft officiating.  Burial was at Cushing Cemetery. Military honors were conducted by American Legion Nash Post 140.  Online condolences may be sent to rohdefh.com.

Karel Everett Grant was born November 6, 1934 in Ute, Iowa, the son of Everett and Genevieve (Black) Grant. He was raised and educated in Anthon, Iowa, graduating in 1952. He then attended Army basic training in El Paso, Texas and served in Germany.

He married Nancy Ann Bauer on October 18, 1969 in Anthon, Iowa. Nancy and Karel later moved to Kingsley where they raised their family. His biggest loves were his two daughters, Michele and Susan; his son-in-law, Chuck; and his granddaughters, Arianna and Brianna.

Karel and Nancy adored their family and their adopted family.  The Grants were known for taking in children who needed a helping hand, and they became part of the Grant family. He adopted grown children as his own. There was always a hot meal and a place to sleep at the house. He was a friend for life.

Karel worked construction for Bill Barkley for several years. He then began his career as a truck driver, driving for Hirschbach, American Freight System, Donn Lee, Schuster, and the Hinton Elevator.

He may have been gone from home a lot of the time, but when he came home, it was all about family. He was a friend for life. Biggest bark and the gentlest of hands.

Karel was preceded in death by his wife and parents; a brother, Mervin Douglas; and his in-laws, Whyndam and Dorothy (Helken) Bauer.