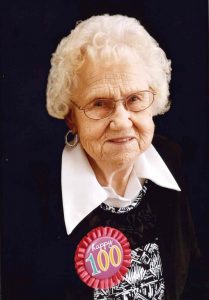 A Celebration of Life Service will be held at a later date.

Lerdean was born in Monona County, Iowa on April 12, 1916, the daughter of Bernard and Emma (Laumbach) Andresen.

She was united in marriage with William Hamann on September 25, 1934. Shortly thereafter, the couple moved to Oto, Iowa. They made that their home until 1986.  They subsequently moved to California and then to Arizona.

She was preceded in death by her parents; her husband; a brother, Elmer Andresen; a sister, Arlene Allemang; and a great-grandson, Michael Robson.