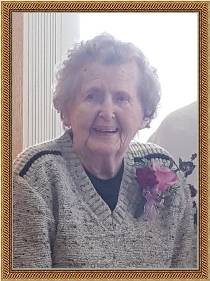 Services will be held at 2 p.m. on Saturday, September 16 at Immaculate Conception Catholic Church in Cherokee. Rev. Dan Guenther will officiate. Burial will be in Quimby Cemetery at a later date.

Visitation with the family will be from 4-7 p.m. on Friday, September 15, with a prayer service at 7 p.m., at Greenwood-Schubert Funeral Home in Cherokee. Online condolences may be sent to the family at www.greenwoodfuneral.com.

Lucille King, the daughter of Arthur and Zintka (Heard) Rasmussen, was born March 15, 1922 in Bronson, Iowa. Her childhood years were spent in Bronson, where she attended school and graduated from high school. Following graduation, she worked at Cudahy’s Meat Processing.

On June 28, 1941, Lucille was united in marriage to William “Bill” King in Sioux City. They moved to Quimby in 1946, where she helped farm and raise their children.

In 1949, they moved into Quimby, where they were business owners until 1975, when Lucille went to work for the MHI. She was a cook there until her retirement in 1987.

She enjoyed playing cards and being outside, whether it was mowing her lawn or tending to her flowers.

She spent many devoted hours cooking for her family, and especially loved baking her own bread. Her greatest joy was spending time with her family and friends.