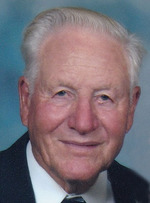 Johnson-Earnest Funeral Home in Kingsley was in charge of arrangements. Expressions of sympathy may be directed through www.mauerjohnsonfh.com.

Francis James “Jim” Berens, the son of Joseph and Mary Berens, was born in Dunlap, Iowa, on March 21, 1926. A year later, the family moved to nearby Neola, Iowa. His sibling were Dolores (Fischer), George, Robert, and Joann (Kenealy).

Jim was an outstanding athlete throughout his life. While in eighth grade, he played on the Neola baseball town team. On his high school basketball team, “Southpaw Berens” led the 7-man St. Joe’s Rockets to state tournaments, where they fared well against schools much larger. He was named all-county several times and Class B All-State Center his senior year.

While in high school, Jim also boxed amateur Golden Gloves in nearby Omaha. He was the runner-up in the light-heavyweight division of the Midwest Golden Gloves tournament.

After graduation, Jim followed in the footsteps of his brothers by enlisting in the military during World War II — except that he chose the Navy over the Army. While he was stationed at Camp Hill, U.S. Naval Training Center in Farragut, Idaho, Jim set a record on the cross-country course. Apparently, running to school and back to the farm every day paid big dividends.

Following his time in the Pacific as a Seabee during the war, Jim pursued his dream of being a major league pitcher, playing on St. Louis Cardinals and New York Yankees farm teams.

Following advice to get more seasoning playing semi-pro ball, Jim was eventually hired to play for the Kingsley Cubs. Now known as Lefty, Jim was a great asset to the team, on one occasion pitching a no-hitter (one of three in his career).

While boarding with Sime and Allene Gabel, Jim eventually married their daughter, Dorothy, on Sept. 24, 1949.

Due to back issues, Jim turned his energies toward work and recreational hobbies. During 17 of his 50 years working as a rural carrier, Jim held a second job working as a brakeman out of Sioux City for the Chicago & North Western Railway.

Despite this grueling workload, Jim expended even more energy toward sports.

A self-taught golfer, tennis player, and skier, Jim would enlist anyone in town to share in his activities. He and several of his lifelong buddies even built a modified ski tow on Kingsley’s old golf course, re-purposing a pickup truck, some blocks and a rope.

Jim shared his love of athletics with anyone he came in contact with. He gave away countless tennis rackets, tennis balls, golf balls, and advice to help the next generations develop a love for sports and being active.

Jim was also a prominent member of St. Michael’s Catholic Church, serving as a lector, Eucharistic minister, and occasional cantor.

At age 60, Jim earned his private pilot’s license. He frequently gave Kingsley residents an aerial view of the town from his Cherokee-based airplane.

Jim was also noted for his love of dogs — in particular, his Dalmatian, Bobo, who often delivered mail in town with his master. His basset hound, Ed, attended many softball games and served as an unofficial mascot.

Jim was preceded in death by wife of 59 years, Dorothy; his brother, George; and his parents, Mary and Joe.