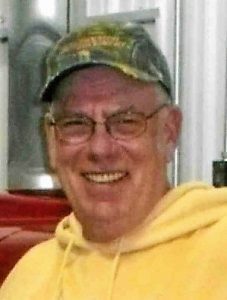 Richard “Rich” D. Nielsen, 74, of Kingsley, Iowa, passed away unexpectedly on Wednesday, September 13, 2017, at his residence in Kingsley, Iowa.

Services were held at 11:00 a.m. on Monday, September 18, 2017, with Rev. Duane Miesner officiating, at Rohde Funeral Home in Kingsley, Iowa.  Online expressions may be sent to www.rohdefh.com.

Rich was born November 14, 1942 in Rock Valley, Iowa to Lowell and Naomi (Negless) Nielsen. He graduated from Woodbury Central High School in 1960.

He was drafted to the Army in October 1966. He served in Vietnam from March of 1967 until March of 1968.  When he returned to the states, he finished his tour of duty at Fort Sill in Oklahoma.

He married Norma Jean Jaacks on June 1, 1966 in Moville, Iowa. He was on guard duty in Vietnam on their first anniversary.

Rich worked for Mike Hagan at Hagans Body Shop for many years. Then he worked at Vern Anderson implement until retiring.

Family and friends were always very important to Rich. After his retirement, he started going downtown in the morning and joined a great group of guys for coffee.  Not only did he enjoy the guys he sat with, but also all the other guys that were there.

He had a special neighbor friend, Todd Beelner, who was like a son to him. They would get together and talk cars and the news of the day.

He loved to travel. In 1975, he and Jeanne went to Europe touring five countries.  Rich enjoyed going to Colorado every year for the last 35 years.  The mountains just kept calling him.

In retirement, he was able to devout more time to his passion for cars.  He loved mowing his yard and keeping it nice.  He also mowed the Chad Groepper Memorial for the Groepper family.  Chad rode Rich’s school bus when Chad was in school.

He was preceded in death by his parents, Lowell and Naomi Nielsen; his brother Raymond; and his in-laws, George and Verna Jaacks.