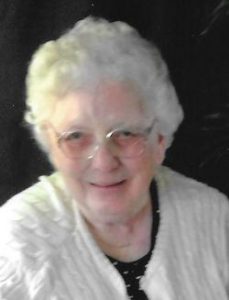 Services were held at 10:30 a.m. on Monday, September 25, 2017 at Becker-Hunt Funeral Home, with the Rev. Katie Newman officiating. Burial was in Memorial Park Cemetery.

She was employed as secretary to the school superintendent and the Cushing telephone officer before moving to Sioux City, where she was employed with T.S. Martin Department Store.

They lived on the Weber farm near Holly Springs, Iowa. They bought the family farm and continued to farm until retiring and moving to Dakota City in 1989.

She was a member of St. John Evangelical & Reformed Church in German City, Iowa. She was also a member of American Legion Auxiliary Post 666 in Smithland, Iowa for more than 34 years.

The couple sold their home in Dakota City and moved to South Sioux City in August 1997.

Survivors include a son, Delane and his wife, Shelly Weber from Kennewick, Washington; a daughter, Pamela and her husband, Freddy Baker of Hornick; three granddaughters: Jennifer (Justin) Prichard, Katelyn (Brian) Gibson, and Heather Weber and friend Dustin; and six great-grandchildren.