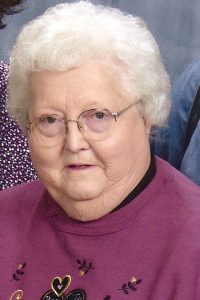 Services were held at 10:30 a.m. on Monday, October 2, 2017 at Rohde Funeral Home in Kingsley, Iowa with Pastor Mike Stevens officiating.  Burial was at Kingsley Cemetery.  Online condolences may be sent to rohdefh.com.

Valeria Ann was born June 26, 1931 in Le Mars, Iowa, the daughter of Melvin J. and Lois (Parry) Bainbridge.  She grew up in the Kingsley area, graduating from Union Consolidated School in 1949.

On February 23, 1957 she married Ted Bolton.  They made their home on the family farm northwest of Kingsley, Iowa, where they raised their family.  Ted died on January 31, 1974.