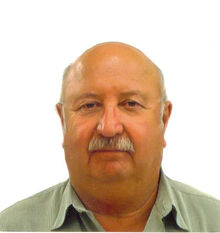 Daniel Owen Ronfeldt, 67, of Smithland, Iowa, a faithful servant of Jesus Christ, went home to be with his Lord on Tuesday, October 3, 2017.

Arrangements are under the direction of Rush Family Care Service in Onawa, Iowa. Online condolences may be left for the family at www.rushfamilycareservice.com.

Daniel Owen was born on February 5, 1950 in Sioux City, Iowa, the son of Mason and Letha (Wise) Ronfeldt. He graduated from East High School in 1967.

Daniel and Marcia Morris were united in marriage on May 4, 1968 in Sioux City, Iowa.

He enlisted in the United States Navy and served four years during the Vietnam War. He was honorably discharged on February 1, 1972.

Daniel then returned to Hornick and was employed by the Hornick Elevator for one year. He then began farming with his father-in-law.

In addition to farming, he and his brother Jim formed HCCS, an industrial automation company and automated meat processing plants.

From 1999 to 2008, Daniel and Marcia worked together, traveling the United States, updating cable maps for Cox Cable. He was currently operating Ronfeldt Contracting.

The couple enjoyed traveling in their 5th wheel. Daniel was a member of Holly Springs Bible Fellowship in Holly Springs, Iowa.

He was preceded in death by his father, Mason Ronfeldt; a daughter, Mindy Ronfeldt; his father-in-law, Robert Morris, Jr; brothers-in-law, Rick Morris, Robin Morris, and Bill Bean; and a nephew, Philip Schwegler.