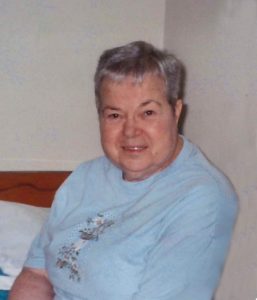 A Memorial Mass was held at 10:30 a.m. on Saturday, October 14, 2017 at St. Joseph’s Catholic Church of Anthon, Iowa. Msgr. Mark Duchaine officiated with committal services following in the Oto Cemetery of Oto, Iowa.

On December 26, 1948, she was united in marriage to Kendell Slentz in Oto, Iowa. The couple attended Wayne State Teacher College in Wayne, Nebraska.

After several years of teaching in Nebraska and Iowa, the couple spent 10 years teaching military children in Japan, Germany and Newfoundland.

Doris continued her love of teaching for 31 years. She taught both vocal and band before eventually teaching first grade students.

After Doris and Kendell retired, they spent several years in Thomson, Illinois before moving back to Iowa in 1998. For 16 years, she and Kendell spent their winters in Weslaco, Texas.

Doris had a strong love for music, and she especially loved playing her trumpet. She played in a variety of bands while living in Illinois and Texas, and she participated in the Anthon City Band.

Doris was a people person who loved her dog and loved bike riding. She was a faithful member of the Catholic church.

Left to cherish her memory are numerous cousins, nieces and nephews and her sisters-in-law, Zella (Albert) Copley of Maricopa, Arizona and Gayla (John) Wilson of Anthon, Iowa.

She was preceded in death by her parents Leonard and Nettie Ives; her husband, Kendell Slentz; her grandparents, Jim and Josie Ives; a brother, Donald Ives; a sister, Jalana; and two nephews, Ronald Moore and Donald Ives.