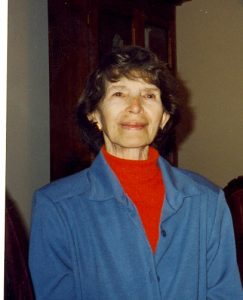 Wilma A. McMahon, 102, of Clinton, Iowa, formerly of Pierson, passed away on Friday, October 20, 2017 at the Alverno Health Care Facility in Clinton.

Funeral services will be held at 11:00 a.m. on Friday, October 27, 2017 at the Johnson-Earnest Funeral Home in Kingsley.  Rev. Tami Groth of Salem Lutheran Church will officiate.  Burial will follow at Greenwood Cemetery in Pierson.

Visitation will begin at 10:00 a.m. on Friday.   Expressions of sympathy may be sent to the family at www.mauerjohnsonfh.com.

Wilma Augusta Rieckmann was born February 9, 1915 in Kingsley, Iowa, the daughter of Otto and Hedwig (Bishof) Rieckmann. She was a 1932 graduate and valedictorian at Pierson High School.

Wilma worked for the post office and as a bank teller in Pierson, Iowa. She was a member of the Salem Lutheran Church, where she played the organ for many years. She also confirmed her baptism at that church.

She enjoyed crossword puzzles, all types of music and playing bingo.

In addition to her husband, Wilma was preceded in death by her parents, one brother, and one sister.