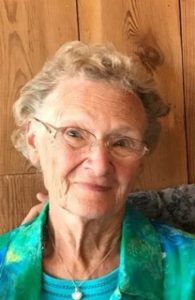 Beverlyn A. Stoneking, age 80, of Cushing, passed away on Wednes-day, November 1, 2017 at the Mercy Medical Center of Sioux City.

A funeral service was held on Sunday, November 5, 2017 at 1:30 p.m. at the St. John Lutheran Church of Cushing with the Pastor Tami Groth officiating.  Burial was at the Cushing Cemetery of Cushing.  The Nicklas D. Jensen Funeral Home of Correctionville is in charge of the arrangements. Online condolences can be made at nicklasdjensenfh.com

Beverlyn A. Stoneking was born July 10, 1937 to Viola Maragret (Schmidt) and Hans Fred Nielsen at home in rural Ida County.  She was baptized at St. Paul Lutheran Church of Midway in 1937 and confirmed at St. John Lutheran Church of Cushing in 1951.

Beverlyn attended Cushing Consolidated School and graduated as Valedictorian with the class of 1955.

Beverlyn was united in marriage to Douglas Stoneking on December 3, 1955.  To this union, three children were born.

A lifelong Cushing resident, she worked as a school secretary for 49 years, at Cushing Consolidated, then Eastwood and finally at River Valley.  She also helped Douglas with his business Stoneking Plumbing and Heating.

She was a member of PEO, Town and Country, Red Hats, Cushing Legion Auxiliary and Retired Staff of River Valley.  She was very giving of her time to help others and often served at a soup kitchen. She was always a willing chauffeur to those in need.

She enjoyed traveling with family and friends, fishing, gardening both flowers and vegetables and spending time with her family.

She was an avid reader and belonged to two book clubs.  She was a member of St. John Lutheran Church where she attended the Thursday woman’s circle evening.

She was preceded in death by her parents, her step-father, Edwin Hummel; her husband Douglas in 1997; and her brother-in-law, Kenneth Stoneking.

Memorials can be made to St. John Lutheran Church or the library of your choice.