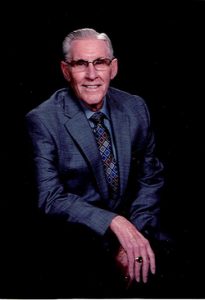 Robert Lawrence Karhoff was born December 13, 1928, in Danbury, Iowa. He was the son of Bernard and Eva (Sharkey) Karhoff. Robert attended country schools and graduated from Anthon High School in 1947.

After high school, Bob enlisted in the U.S. Army and served in the Korean War for four years. On June 4, 1953, Bob married LaVonne Livermore in Anthon, Iowa. Bob worked at the Anthon Elevator and then the couple moved to Alta, where he was a Kent Feed Salesman for the elevator. They then moved to Reinbeck and Bob managed the Voorhies elevator.

In 1966, the couple settled in Pocahontas and Bob managed the Quaker Oats Elevator for three years. He then began working for Monsanto as a Sales Representative and was awarded the Master Salesman award twice.

Bob retired in 1989. During his retirement, Bob worked for Jack Fischer seeds.

Bob was a member of the Resurrection of Our Lord Catholic Church where he served as Eucharistic Minister, Knights of Columbus, American Legion and Pocahontas Golf Club.