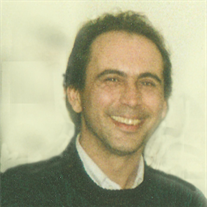 Memorial services will be 10 a.m. Saturday at Morningside Chapel, Christy-Smith Funeral Homes Inurnment will be in Arlington Township Cemetery, Moville, Iowa. Visitation will be 9 a.m. until service time Saturday at the funeral home.

Tim was born on April 3, 1958, in Sioux City, the son of James and Loretta (Webb) Main. He attended Lawton-Bronson school, graduating in 1976.

Tim served as his mother’s caregiver for many years until her death. He worked at several different retail establishments. Tim was an avid reader and a comic book collector. He enjoyed watching old movies.

His life will always be remembered by his brothers, Mike (Deb), John (Lisa), Pat (Gena), and Walter (Deborah); his sisters, Charla Rose (Doug), Lorri Persinger (Jeff), and Gail Anderson (Bruce); a sister-in-law, Jeanie Main; and many nieces and nephews.

Tim was preceded in death by his parents; a brother, Dan Main; and grandparents, Jess and Helen Main, Albert and Anna Webb.